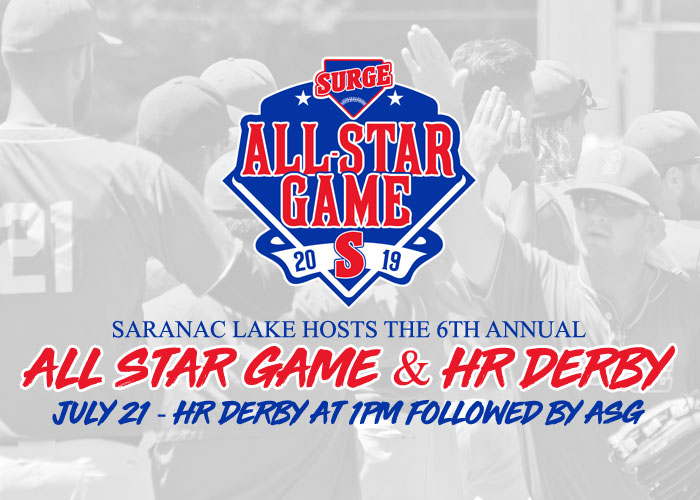 SARANAC LAKE, NY – The Empire League has officially announced that Saranac Lake will be the host of the 2019 All Star Game and Home Run Derby.

The date for the All Star Game and Home Run Derby will be July 21st. Both events will happen on the same day and it will be followed up by a All Star Game Night Celebration  at the Hotel Saranac where all friends, families, Fans and guests are all invited.

The Home Run Derby will kick off the All Star Game at 1  pm in which 6 players, one from each team, will represent its team. Each player will have 10 outs to hit as many Home Runs over the  fence as possible. For every swing in which the ball does not go fair over the outfield fence  will be counted as an out. The top 2 Home Run hitters will then advance to the final round of 10 outs to see who will be crowned the 2019 Home Run Derby Champion.

The Night Celebration will then follow from 4pm-7pm as the Empire League throws the 2019 Annual All Star Game Night Celebration at Hotel Saranac together with 14th Star Brewing Company. The night celebration will be a tremendous opportunity for friends and fans to get autographs, pictures and spend time getting to know the players while raising funds to benefit and honor our veterans. Proceeds from this night celebration will benefit the North Country Honor Flight, 14th Star Brewing Company and Round the Bases non for profit charities. The event will be on the 2nd floor of the very beautiful Hotel Saranac located on 100 Main Street in Saranac Lake, New York.

This will be a day and night to remember as we honor our veterans and give back to charities in need. The Empire League invites you, the fans, families and friends to join us for this day of fun for a good cause.

Tickets for the All Star Game and Home Run Derby will be $10 for Adults and Children under 16 are free. Tickets can ONLY be purchased at the gate the day of the event.